The Chinese Maps of the World. 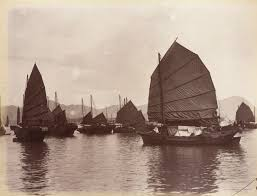 Whilst it is the work of the Greek, Anaximander and his student Hecataeus that are considered to be the first Maps of the World the Chinese were not very far behind. Responsible for so much in the world in terms of inventions and discovery it’s no surprise that they were also creating Maps and exploring the world around them.

However in this case it took them some time to catch up with the Greeks, they being more of a seafaring nation out of some necessity. The earliest known maps to survive in China date back to the 4th century BC. In 1986, in an archaeological excavation of a Qin State tomb in what is now Fangmatan, near Tianshui District, Gansu province, seven ancient Chinese maps were found. They are intricate maps made on to wooden blocks and drawn with what must have been the finest ink. Due to the age of the maps the wood must have also been of some of the highest quality to have survived the thousands of years since they were scribed.

These early maps are very much like our Planning Maps today. Although not as detailed as the ones from https://www.themapshop.co.uk/planning_maps_online.htm, they feature lots of important information relating to the location of good wood and the distance to ship it. It is believed that this is one of the first examples of a map used for economic purposes and not just geographically informative.